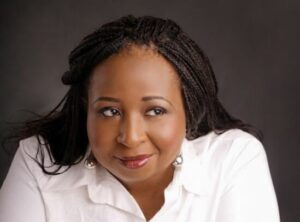 Peace Anyiam-Osigwe, filmmaker and founder of the African Movie Academy Awards and President of the Association of Movie Producers, is dead.

She died at a hospital after being in a coma for some days.

Confirming her passing, a colleague, Obi Emelonye, said Anyiam-Osigwe succumbed to the cold hands of death during a brief illness.

Emelonye shared her picture and wrote on his Instagram account on Tuesday: “Thank you and good night dada Peace. ”

May her gentle soul rest in peace.

Peace Anyiam-Osigwe, previously Peace Anyiam-Fiberesima (30 March 1969 – 9 January 2023) was a Nigerian filmmaker and entertainment executive who has been called “the queen of Nollywood films”.

She is the founder of globally acclaimed film ceremony, Africa Movie Academy Awards. The Guardian documents that she pioneered the screening of Nollywood films at international film festivals.

She directed the first music video of hip-hop sensation, P-Square. In 2012, she was bestowed a Member of the Order of the Federal Republic by the Nigerian government for her contribution to the entertainment industry.