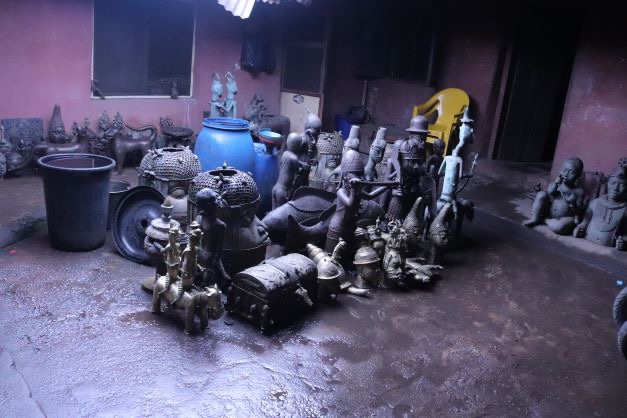 A long piece appeared in the Financial Times on Friday, November 4, 2022. Captioned “The Benin Bronzes and the road to restitution,” it tried to put in context the importance of the Digital Benin initiative, which, according to the FT report, has “tracked down 5,240 bronzes to 131 separate collections, mainly in the global north.”

The Digital Benin initiative was launched in 2020 with a take-off grant of 1.2m euros. It was managed by Anne Luther, an expert in digital humanities working alongside colleagues like art historian Felicity Bodenstein, Professor Barbara Plankensteiner, director of the Museum am Rothenbaum-World Cultures and Arts (MARKK) in Hamburg, and Godfrey Ekhator-Obogie, who was the the lead researcher in Nigeria.

The work they have done not only extends the work begun by Dan Hicks. The respected academic, put a list of looted artefacts in his book, The Brutish Museum, but it also opens up a new vista in the calls for restitution of looted Benin artefacts.

The call for restitution now has a firm anchor with the production and existence of a comprehensive digital catalogue detailing the sheer scale of the looting and dispersal.

While many countries and institutions from Germany to the US have pledged to return over nearly 1,400 pieces, many would remain in the West. A project such as Digital Benin would thus help bridge the yawning temporospatial gap.

A consideration of this project is important in the context of the unfolding digitization agenda of the Edo Museum of West African Art (EMOWAA). The agenda when implemented, will see the launch of its digital lab where its curators “will bring West Africa’s rich cultural knowledge and our imagined futures into 2D/3D reality for global engagement.”

But where Digital Benin has focused on antiquity and the Benin kingdom, EMOWAA’s scope will be more expansive, ranging from antiquity to contemporaneity and extending beyond Nigeria.

To give a fillip to their agenda, EMOWAA working with the Ford Foundation, has begun training over 20 artists, scholars and stakeholders in the ecosystem on the need for and imperative of digitization. The sessions, which began in Lagos will culminate in Benin and will introduce participants to photogrammetry, technical theory of photography, data input and storage, amongst others.

What EMOWAA is doing fits into their overarching objective which is rooted in their “ambition to create a world-class museum, research and education center – connecting West Africa’s ancient heritage to its thriving contemporary arts and culture.”

It also fits into the framework of the “art gallery of the future” where digitization will go beyond access and storage to encompass research and documentation.

Ndidi Dike, multi-dimensional artist, sees the digitization agenda as germane “considering that we live in a fast paced world where life is constantly evolving it is critical you adapt to these challenges. As a multi- disciplinary artist that engages with digital and lens based technologies these tools are critical to production and storage and documentation.”

EMOWAA notes on its website that “At the Digital Lab, EMOWAA’s growing creative and research community will unlock the possibilities of digital technologies to advance the heritage economy, education, and creative industries. Hosted at the Pavilion, this facility will make cultural content of Nigerian and African origin easy to access, use and reuse through the creation of multimedia digital catalogues and online libraries.”

The digital lab when complete and operational will be based in the Pavilion within the larger EMOWAA museum designed by David Adjaye OBE, the British-Ghanaian architect who also designed the Smithsonian National Museum of African American History and Culture in Washington DC.

It will allow digital access to works while providing context and insight for research. Properly digitized works of art are critical to preserving a part of our legacy in the event of the destruction or loss of the physical version. With digitization, access is opened up and there is more flexibility in the use and exploitation of the artefacts. Digitizing improves accessibility and flexibility.

Adenrele Sonariwo, Director at rele gallery believes that digitization is important. “I think there is an imperative for digitization of art works. The physical and the virtual can exist side by side especially for those who cannot come to the physical space. As a gallerist, I know that a lot of sales happen online so it is important for access and sales and research.”

Writing in Managedoutsource.com and expanding on the imperative of digitization, Juan Reyes notes that “once the digitized materials are placed online, it becomes easy for people to view an artist’s work from anywhere at any time.”

Rom Isichei, leading contemporary artist from Nigeria agrees noting that it is “quite a welcome development in this age where the physical library system is undergoing an eclipse and the study of art history in grad-school is still without splendor. It sure gives the artists wider reach and a lasting legacy.”

Google led the way in 2011 with its Google Art Project, which digitized the varied contents of 17 major art galleries. Integrating its Streetview technology with high-quality digital imaging, Google made it possible for people living far away from the physical locations of the galleries to embark on a virtual tour through the galleries underlining the access that digitization enables.

Writing in his article “The art gallery of the future, and why we must digitize art” Martin Lugton writes that “viewing art in a gallery isn’t always ideal. Works only exist in a single place at any one time, meaning that if you don’t happen to be within travelling distance, you can’t experience them. Even if you are able to visit them, some of the greatest paintings are spoiled by their gallery setting. The Mona Lisa in the Louvre is too distant to see through the crowds.”

EMOWAA intends to democratize access to old and new works, provide insight and context, and preserve them for the future in line with its mantra: “Our Heritage Revisited, Our Future Reimagined.”

UNESCO defines cultural heritage as “the legacy of physical artefacts and intangible attributes of a group or society that are inherited from past generations, maintained in the present and bestowed for the benefit of future generations.”

This definition when taken at the gush indicates that outstanding contemporary works of today would form the cultural heritage of tomorrow and what EMOWAA seeks to do with its digitization agenda is to preserve those works for the future in as pristine a condition as possible.